Celtic mythology is awash with powerful women, and they remain quite an enigma. On the one hand, we have feisty Queens like Medb, fearsome Goddesses like the Morrigan, gifted healers like Airmid, female smiths like Brigid, respected Druidesses like Bodhmall,  and knowledgeable lawgivers like  Brigid Brethach. On the other, we have the helpless heroines such as Etain, Deirdre, and Grainne, who seemingly did little but lure men with their beauty into tragedy and catastrophe.

We already know from the Brehon Laws that in ancient Ireland, women enjoyed far greater freedoms than those elsewhere. A woman could enjoy equal status with her husband in marriage; she had the right to divorce him if he did not fulfil his marital obligations, and if so, she was entitled to take with her all her own possessions and half of their joint property, plus a portion for damages. Women were also entitled to enter all the same professions as men.

Which meant that ancient Ireland had its fair share of warrior woman, and some of them were quite kickass, by all accounts!

Now before we go any further, a warning. You know how much I love researching. I can get quite lost in it at times. Even so, when it comes to researching women in Irish mythology, there’s a bit of a black hole. You might assume that society was quite patriarchal, yet we know from texts such as the Brehon Law, and a few others that still survive, such as the Cattle Raid of Cooley, that this is not so. At least, not to the extent you might have thought.

The stories were all written down by Christian monks, and without offending any Christians reading this blog, it’s a fact that they did alter stories, and even earlier written texts, to fit in with their beliefs. The Danann and the Sidhe, for example, were seen as demons and dangerous; and women in the old stories were either ignored, left out completely, or re-written as demure, beautiful, mindless voiceless creatures whose sole aim in life was to marry, have babies, serve the men in her life and God. 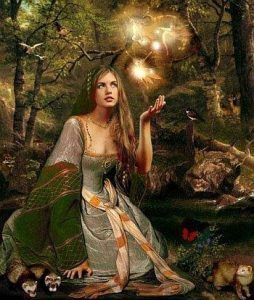 So for example, we have few Queens, because powerful women were not tolerated. Key women remain nameless, such as Etain’s mortal mother, who swallowed Etain when in her butterfly incarnation and fell into her cup of wine. She was known only as ‘the wife of’. This treatment of women in Irish mythology is quite common. And frustrating. Such details were just not seen as important.

And so I have come across references to warrior women, but can’t tell you anything about them, because they were dropped from existence. Often, even really key women, as you will find out, are only mentioned in relation to the male hero of the tale, rather than in her own right. As you will see…

There are two famous bands of warriors in Irish mythology; Fionn mac Cumhall’s Fianna, and the Red Branch Knights of Ulster.

The women of the Fianna were known as banféinní, meaning ‘female warrior-hunter’. It’s not clear whether they had their own battalion, or whether they were ranked alongside their male counterparts, but I suspect it to be the latter.

There are not many women warriors mentioned by name in the stories of the Fianna. Ailbhe Gruadbrecc is one; her name means Ailbhe (Al-va) ‘of the freckled cheeks’, and she was a daughter of High King Cormac mac Art. It is thought she was a wife, or lover, of Fionn mac Cumall, one of Ireland’s greatest legendary heroes, but died after only a year. One might assume that she died in childbirth, being a young woman, but I suspect that as a warrior, she was more likely to have died either in battle, or on a hunting expedition. It was also said of her that she was ‘the third best woman who ever laid with a man’. Nice way to be remembered! Despite being the High King’s daughter, and married to Fionn, she clearly wasn’t important enough to bother mentioning the manner of her passing. Creadue/ Creidne was the name of a another female warrior in the Fianna about whom I could find out absolutely nothing.

Interestingly, Fionn’s incredible military and hunting success can be attributed to two women. As a child, his care was entrusted to his aunt Bodhmal and another woman named Liath Luachra. They disappeared with him into the forests of the Slieve Bloom mountains to keep him safe from his father’s killers. Bodhmal was his father’s sister, a Druid and warrior. Liath Luachra was a shadowy warrior-woman, skilled in training men for battle and hunting. Her name means ‘the grey one of Luchair’. So here we have a fine example of two high-born women of skill so exceptional, they made their charge into a famous hero, and yet all we know about them is their names.

I have found no reference to women serving in the Red Branch Knights; these were the men of another great Irish legendary hero, Cuchullain. He was a killer and a womaniser. Men wanted to be him (or kill him), and women wanted to be with him. Yet there is almost no other nuance to his personality, save one; he didn’t kill women.

Of course, Cuchullain is most famous for opposing the war efforts of Queen Medb of Connacht. The Cattle Raid of Cooley is one of the most enduring and best loved of Irish mythological stories. I have mentioned Medb loads of times in this blog, so I’m not going to go into any great detail here. Suffice it to say that she went to war over possession of a bull, in order that she could claim her husband, Aillil, did not possess more wealth than her. I guess she had a pretty big ego, that she was prepared to risk so many lives for her pride; either that, or she was made to look like an evil cow (sorry, pardon the pun), an example of what can happen when women get into power.

What I love about her story though, is how earthy it is. It holds nothing back. For example, she had many husbands and lovers, and was said to require 30 men a day to satisfy her sexual appetite, if her lover Fergus wasn’t around. I guess virility was linked with power and strength, even among women. Even her menstrual cycle is mentioned;

“Then her issue of blood came upon Medb and she said: ‘Fergus, cover the retreat of the men of Ireland that I may pass my water’. ‘By my conscience’ said Fergus, ‘It is ill-timed and it is not right to do so’. ‘Yet I cannot but do so’ said Medb, ‘for I shall not live unless I do’… Medb passed her water and it made three great trenches in each of which a household can fit. Hence the place is called Fúal Medba (Medb’s piss).

Táin Bó Cúailnge from the Book of Leinster

As well as directing the battle, making decisions on military strategy, deals and alliances (which often included the offer of her ‘friendly thighs’), it seems Medb was also involved in the actual fighting, as Cuchullain tells his physician of a spear wound she gave him.

Yet again, we find that this famous hero was trained by a woman. Scathach (Ska-ha) was a female warrior who had a military training academy, Dún Scáithmeaning ‘fortress of shadows’ on the Isle of Skye. Doesn’t sound very inviting, does it? And indeed, the only way Cuchullain can enter is by leaping across a deep ravine, thus risking death. He makes it, however, proving himself worthy. Students travelled far and wide to train under her. Cuchullain had many adventures whilst he was there, including becoming the lover of Uathach, Scathach’s daughter after breaking her fingers… don’t ask! 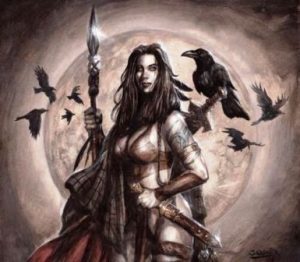 When Aoife, Scathach’s sister and rival threatens her, Cuchullain fights Aoife in single combat. When he defeats her, he is so turned on by her battle skills, that he spares her life if she sleeps with him. Subsequently, she becomes pregnant with his son, Connla. Connla’s story is tragic and beautiful, one of my favourite legends, but I’ll not tell it here. It needs its own page.

When Cuchullain completes his training, he returns to Ulster to claim Emer as his bride. He kills her father, and carries her off in triumph, only to be confronted by an army led by another warrior woman, Scenmed, Emer’s sister or aunt, who attempt unsuccessfully to rescue her.

Nessa, Queen of Ulster, was another fiery and scheming warrior woman. She deceived Fergus out of his throne and installed her son Conchobar upon it, whereupon Fergus went to Connacht to join Medb and became her lover. She was originally called Assa meaning ‘gentle’. When her foster-family are ruthlessly murdered, she forms her own band of 27 fianna to track down the killer, and changes her name to Ní-assa, meaning ‘not gentle’. And if that’s not kickass, I don’t know what is.

Muirisc was a lesser known female warrior. She was the daughter of Úgaine Mór, known as Hugony the Great, who was the 66th High King of Ireland, according to the Annals. She had 22 brothers and 2 sisters, and her father, being fair-minded, divided Ireland into 25 portions allotting one to each of his children. This arrangement was said to have lasted 300 years, until the provinces were established by Medb’s father, Eochu Feidlech. Muirisc’s domain extended over Mag Muirisce in Co Mayo, and her Dun lay beneath the slopes of Cruachan Aigli, the Conical Mountain, later to be called Croagh Patrick. She was a sea-captain and a warrior, famed for her bold and daring deeds.

Of course everyone has heard of the Morrigan, the triple aspect female deity said to preside over war-mongery, strife and sovereignty. She was said to have flown over the battle field in the form of a crow, crying harsh encouragement to her men, and striking fear into the hearts of the enemy. I suspect she was pretty nifty with a weapon, too.

I’d particularly like to mention Macha at this point. Sometimes, she is mentioned as one of the Morrigan sisterhood, sometimes not. She was the wife of Nuada Argetlam, who led the invasion of the Tuatha de Danann against the Fir Bolg to claim Ireland. She participated in both battles, and was finally killed as she defended her fallen husband from the Fomori giant-king, Balor of the Evil Eye. That’s devotion for you.

Finally, I couldn’t draw this post to an end without mentioning Brigid. Brigid was the Goddess of Spring, and is associated with wisdom, excellence, perfection, high intelligence, poetic eloquence, blacksmithing, healing ability, and druidic knowledge.

She was particularly well loved for her kindness and gentleness. For me, she is the epitome of mythological womanhood; not only did she embody all the much sought after female attributes, including fertility as the Goddess presiding over Spring, but she could conduct herself with skill and aplomb in the forge. Not only could the girl forge a sword, but she could wield it like a maniac too; her skill in warfare is often overlooked in favour of her more ladylike ones.