For the Love of Whiskey

Josh Peters remembers the day he hit the dusty-hunting jackpot.

Visiting a liquor store under new management in Los Angeles, The Whiskey Jug blogger stumbled upon the owners emptying out the back room. The bottles they were clearing out included an array of interesting old whiskies Peters recognized from earlier samplings.

“I walked in at the right time,” he says, adding that he bought about 50 bottles for his personal collection. “Then I told my friends what was left, and they went and cleaned the whole shop out.”

To the uninitiated, poking around the back rooms of a liquor store might seem like a strange hobby. Peters belongs to a tribe known as dusty hunters; essentially, these whiskey enthusiasts seek out rare, limited-release and sometimes out-of-production whiskies that are often collecting dust on shelves and in storerooms of liquor stores.

From New York to Los Angeles, dusty super-sleuths have traversed hundreds of kilometres looking to score the most sought-after bottles, usually produced in the ’40s, ’50s and ’60s. 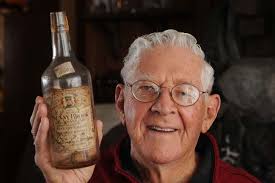 “It became a kind of thing to see if you could find these bottles or how old you could go,” says former dusty hunter Greg Gilbert from northern Virginia, who would visit up to 25 stores in a single day. “After a while, it became a kind of competition as well.”

While the bottles are often procured by hunters for modest price tags, resale prices can set buyers back a pretty penny. Most dusty hunters consider products from the Stitzel-Weller Distillery – which was started by Pappy Van Winkle in 1935 – and National Distillers as the A-listers. The Pappy Van Winkle label is widely considered the holy grail; its 23-year-old Family Reserve can fetch thousands. However, Peters believes the real treasure lies not in a single bottle, but rather in anything the Stitzel-Weller distillery produced before 1969.

And Gilbert agrees. He points to Stitzel-Weller’s unique distillation method (Van Winkle used wheat instead of rye) as part of the appeal. To date, his most valuable find is the distillery’s 1965 Old Fitzgerald Bottled in Bond, of which he bought two for $11.95 a pop.

Today, a single bottle is estimated at around $2,000. Stacey Smith Clark, vice-president of Women Who Whiskey L.A., an experimental whiskey club for women with several chapters across the U.S., admits this is one of two Stitzel-Weller whiskies she dreams of bagging.

“I would be delighted, and probably insufferable, if I were to find a bottle,” she says.

So just what is the fascination with uncovering dusties? Smith Clark likes to describe her hobby as “antiquing.” Gilbert relishes the fact that it’s a chance to sip a piece of history and appreciate the nuances between old-school and current distillation practices. And judging from the documentation of finds on social media, bragging rights seem to be a draw, too.

But it’s far beyond Instagram for Susan Reigler, a certified executive bourbon steward from Louisville, Ky. “It’s kind of a thrill to find something that is relatively rare,” she says. “It would be any sort of thrill of discovery, whether you’re an archaeologist that comes across a new Egyptian tomb or you’re an entomologist who finds a new species of insect.”

Which brings us to the cardinal rule of dusty hunting: knowledge is power. Gilbert prides himself on being able to date a bottle at a glance on the basis of whether it has a tax strip (placed on bottles prior to 1985); the unit of measurement used (it switched from standard to metric in the U.S. in 1980); and the location of distillation on the label (which would indicate a change in ownership). 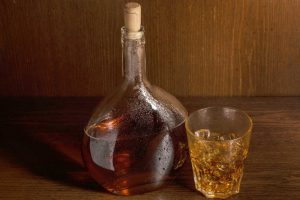 “You really need to understand what you are looking for,” he emphasizes. “You don’t want to walk in and imbibe blindly.”

That also means being able to identify labels, pinpointing when the Universal Product Code began appearing and recognizing the style of the bottles. While honing these practical skills drives the success of the most dedicated dusty hunters, there’s one human aspect that can’t be spotted on a cold glass bottle.

“Being nice and polite goes a long way,” says Smith Clark, who makes it a point to strike up a conversation with store staff. “I find that asking if there’s anything not on the shelves or behind the counter, it yields excellent results if you start off with kindness.”

Today, most stores have been picked over for bottles dating back 50 or 60 years, but the trend hasn’t lost its legs. Peters now counts whiskies from the ’80s, ’90s and early 2000s worth seeking out. But if it’s the older whiskies you’re after, the smart dusty hunters are now turning to estate and garage sales to find them. So it isn’t such a stretch to have a snoop through your parents’ or grandmother’s bar cabinet. Just ask Christine Sismondo.

“Someone came over to my house with a case of 1967 Gooderham Canadian whisky recently,” says the Toronto-based spirits writer. “The mother had died and she had all this liquor that she and her husband had bought, and it was never opened.”

Sismondo got a kick out of trying the sweet spirit—a treat to the taste buds because whiskey doesn’t age after it’s bottled. “It was exactly what it was going to be in 1967,” she says. Similarly, after his windfall find in L.A., Peters opened a bottle of each and had a tasting with friends. And that, for die-hard dusty hunters, is where the true pleasure lies.

“Just have fun with it,” says Peters. “Drink it and enjoy it—don’t hoard it.”